Our small island, only 7 miles long from south to north, and a few blocks to just over a mile wide depending where you are on the island, is home to three cities: Bradenton Beach to the south, Holmes Beach in the center, and Anna Maria on the north end. Each city has its own mayor, city commission and police department. Resident count varies depending on the time of year; it significantly increases from October to April when seasonal residents return to their island home in the sun to escape the cold, harsh northern winters. Holmes Beach is home for the majority of annual residents, with a population of just over 3800, followed by Anna Maria with around 1500 residents and Bradenton Beach checking in with approximately 1150 full time islanders.

The average age on the island is 60 years young. Families with young children, married couples, singles and retirees all make up our island community. Island wide the female to male ratio is nearly 50/50, with only slightly more females than males.

Anna Maria Island, located on the aptly named “Suncoast” boasts 242 days of sunshine a year with a sub-tropical climate. Winters are mild with an occasional short cool spell mixed in causing the locals to put on socks with their flip flops should the temperatures dip down to the 50s. Summertime brings more cloudy days, along with the “liquid sunshine” our lush island vegetation thrives on. 61% of our 56.28 inches of annual rainfall happens in the four months from June through September. Often it is only a brief passing shower or downpour before the sun comes out 20 minutes later and you can re-stake your claim on the sugar white sand beaches under the sunshine. 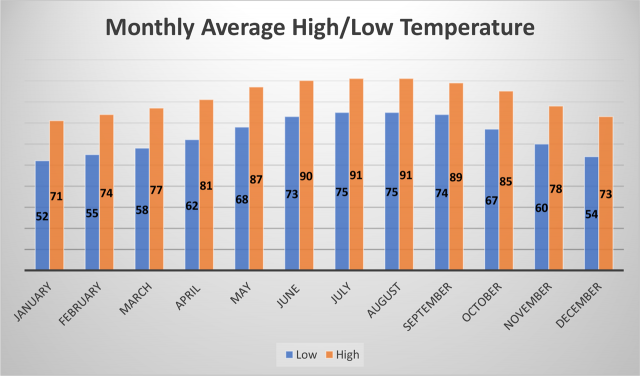 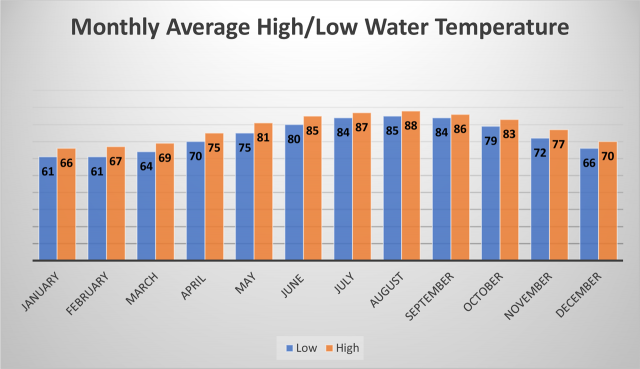 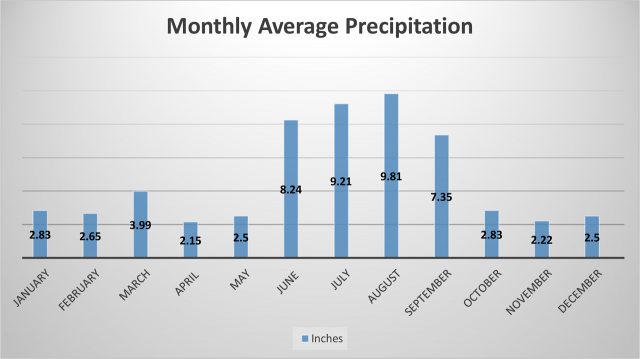 Anna Maria Island is an ecologically diverse barrier island and an important habitat for an amazing array of wildlife. The island itself, as well as the waters in and around it, are teaming with life. Enjoy some time exploring and taking in nature’s free show on the land, in the preserves, in the water and in the air!

The island is considered a bird sanctuary and draws bird enthusiasts from all over the world. It is a major migration point as well as a crucial nesting habitat for both common and rare shorebirds including plovers, sandpipers, oystercatchers and black skimmers. Stroll down the shoreline and take in the variety of gulls and terns, watch the ibis pecking in the sand for a tasty treat or the herons camped alongside the fishermen hoping for a handout. Be sure to keep a lookout over the water for the brown pelicans plunge diving for their dinner. Shorebirds can be seen at almost any time of the day as some feed at high tide, while others feed at low tide.

The beach is not the only place you can find feathered creatures. Wild green parrots can be seen and heard flitting about through the air all around the island, sitting on electric wires, or popping their heads out of the palm tree trunks where they live. You can’t miss an eagle or osprey sighting as these distant relatives are very majestic both in flight and while sitting high up on their perch or in their nest. Both are very large, striking, charismatic birds of prey with the eagle outsizing the osprey in weight and wingspan. One way to tell these two raptors apart is that the osprey’s head and underparts are a greyish white. Ospreys only prey on fish, whereas eagles feed on fish, mammals, reptiles, and many other animals. It’s not uncommon to spot an osprey carting their catch in their powerful feet and talons back to the nest to feed their offspring.

Always a thrill to spot are the roseate spoonbills. Roseate spoonbills are medium-sized waterbirds with a football-shaped body and long legs. Their long bill is flattened into a spoon at the end and protrudes from their small head. Roseate spoonbills are pale pink birds with brighter pink shoulders and rump. They forage swinging their head side to side with their bill under water feeling for prey in the shallows of fresh, brackish and marine waters including bays, mangroves, forested swamps and wetlands. They nest and roost in trees and shrubs along the water’s edge, swamps and wetlands. If you don’t cross paths with one on the island, head across the Anna Maria Island bridge to one of several coastal preserves just off Manatee Avenue. Neal Preserve, Perico Preserve and Robinson Preserve are all great places to explore and seek out these beautiful birds.

While you are across the bridge, another species you are most likely to find is the white pelican, but only in the fall to late spring. White pelicans are true snow-birds, seeking refuge in sunny Florida from the harsh winters in the northern plains. The white pelican is one of the largest birds in North America with an impressive nine-foot wingspan. Distinctive with snowy white feathers and pink-tangerine colored bills, they are often seen flying and swimming in groups. Shy in nature, they avoid open water and prefer isolated, less traveled and protected environments such as estuaries, lakes and mangrove islands. The waters just off the shore in the fishing village of Cortez, the coastal preserves and the bayside of Anna Maria Island are great places to increase your odds of seeing these elusive white creatures. If you are lucky, you may catch a squadron of these exquisite birds floating about in Anna Maria Sound as you come over the Anna Maria Bridge on Manatee Avenue, welcoming you to our little slice of paradise.

Whether you are a first time visitor, a returning visitor or a long time resident, seeing a dolphin or two or more frolicking around the island waters is always a treat. One can never see enough dolphins, it never gets old! There is just something magical and calming about seeing these amazing sea creatures in their natural environment.

Dolphins are mammals, not fish. Like every mammal, dolphins are warm blooded and breathe air using lungs. They must make frequent trips to the surface of the water to catch a breath. Lucky for us! The waters around Anna Maria Island and down into Sarasota Bay are home to over 100 resident dolphins. Mote Marine keeps tabs on them and can actually identify each one by the shapes and different markings on their fins. It is not uncommon to see dolphins as you are strolling along the beach. To enjoy a truly amazing dolphin experience, get out on the water with one of our chamber member tour boat captains and experience the dolphins like never before. Dolphins love to play by the bow and in the wakes from the boats. Our local captains know when and where the dolphins hang out and promise a spectacular, unforgettable experience.

The West Indian manatee is another mammal that also spends their entire life in the water. Fortunately, these large, air-breathing herbivores spend part of their time every year in the warm waters surrounding Anna Maria Island. Known as “gentle giants”, or “sea cows”, manatees are large aquatic relatives of the elephant and are Florida’s state marine mammal. They are found in shallow, slow-moving waters where seagrass beds or vegetation flourish.

The manatees head north from Anna Maria Island in the winter in search of warmer waters. Yes, north is warmer as they settle in the artificially warmed waters at Apollo Beach power plant as well as some of the coastal springs where the temperatures are consistent all year around. The Apollo Beach Manatee Viewing Center is open from November 1 through April 15. Other times of the year manatees can be spotted swimming in the shallow Gulf waters, canals, bays, and preserves around Anna Maria Island. Manatees are a threatened species and are protected by federal and state laws, which prohibit touching, feeding, harming or bothering them. You are welcome to video and photograph them from a distance. Extra care is required while boating as these large gentle giants move very slowly and cannot quickly skirt out of harm’s way. Contact one of our chamber member tour boat captains, and let them take you on a guided tour so you can sit back, relax and enjoy some time on the water and the sights while they do all the work.

Another fascinating marine creature you may come across here is our beloved sea turtle. Five species of sea turtles swim and feed around Anna Maria Island. Loggerheads are the most common to come ashore and nest from May through October each year. As you start your day with a sunrise stroll on the beach, you may encounter one of the many volunteers from the Anna Maria Island Turtle Watch and Shorebird Monitoring. The volunteers walk the beaches in the early morning to identify and stake nests that have been laid by sea turtles coming ashore overnight. Locals love our sea turtles and sea turtle conservation is a way of life here. Visit the Anna Maria Island Turtle Watch website to learn how important it is to limit lighting during turtle nesting season, to level out your sandcastles and holes on the beach, and remove all beach furniture at the end of each day to give the turtles the best chance of surviving. On their website you will also find where you can attend a fun turtle talk to learn all about these cute sea creatures, or even adopt a sea turtle nest.

Should you find yourself wading in the refreshing Gulf waters from April through October, be sure to do the “stingray shuffle”. Stingrays are in the waters year around, but love to partially bury themselves under the sand in the warmer shallow waters. Shuffling your feet across the sand will alert these creatures it’s time for them to move on.

The saltwater and brackish waters around the island are home to so many more marine species that all thrive here. Jellyfish, crabs, stone crabs, a wide range of shark species, as well as numerous kinds of fish can all be found here. Depending on the particular water location, you can find mackerel, trout, amberjack, snapper, snook, grouper, mahi, sheepshead, cobia, mullet, redfish, tarpin, hogfish and many other species. Recreational fishing opportunities abound around Anna Maria Island. Fish off one of the island piers, the beach, or contact an AMI chamber member for fishing charters. The Florida Fish and Wildlife Conservation Commission has all the 411 you’ll need on fishing licenses.

Well into the early 1900s, much of Anna Maria Island was still covered in dense vegetation providing ideal habitats for many land animals. Wild critters were abundant in the early days and included fox, deer, gophers, and wild cats. Racoons were also plentiful and often raised as pets. Racoons continue to have a presence on the island. Today the island is also still home to many other small mammals, animals and reptiles to include rabbits, squirrels, possums, snakes, lizards, geckos, frogs, and armadillos as well as gopher tortoises. You just never know what little creature you will come across as you explore this tropical paradise.