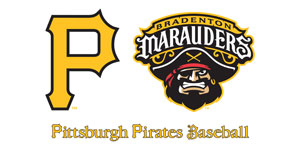 The Bradenton Marauders are the Class A-Advanced affiliate of the Pittsburgh Pirates.

Since the mid-1990's the Pirates Class A-Advanced team was located in the heart of the Blue Ridge Mountains in Lynchburg, Virginia and playing in the Carolina League. Following the 2009 season there was a swap. With the announcement that the Cincinnati Reds were moving their Spring Training home from Sarasota, Florida to Arizona, the Pirates purchased the team's Florida State League affiliate. In October 2009, the Bradenton Marauders were announced as the league's newest team and newest member of the Pirates family.

The new team's name was announced as the Marauders, making the club one of just six in the FSL not to take on its parent club's moniker.

"While we also wanted the name of the club to be closely associated with the Pirate brand,'' team president Frank Coonelly told the Sarasota Herald-Tribune. "We didn't want to simply name the club the Bradenton Pirates."

"We're extremely excited to bring a full-season minor league team to the Bradenton community," Coonelly told the Bradenton Times. "We have had a very long and rich partnership with the city of Bradenton for over 41 years now, and to be able to have our commitment year round in Bradenton truly the southern home of the Pittsburgh Pirates."

Great success came along with the new club. The Marauders made the postseason in their first year by winning the FSL's South Division second half championship. Bradenton led the league in offense and saw several pitchers promoted to Double-A, where the Curve won an Eastern League championship.

The Marauders reached the postseason the following year and then again in 2014, the latter being a season in which they had both the FSL Player of the Year (Josh Bell) and Pitcher of the Year (Tyler Glasnow).

2016 was a record-setting year in Bradenton. The Marauders captured their first FSL championship in team history. They also led the league in batting average, on-base percentage, and runs scored during the regular season.

As of the end of the 2016 season, there have been 36 former Marauders who have gone on to make their major league debuts.